Ayiti is the name of the island called Hispaniola where you have the two countries of Haiti and Dominican Republic. Haiti’s real name is Ayiti. It is a remarkable country in today’s world. When the Europeans “discovered” Hispaniola they shortly after decided that it was their island and started to make the people living there work for them. The work was so hard that most people died. The European Invaders kidnapped people in Africa to continue the work on the plantations so Europeans could get coffee, sugar, cotton, etc for free. No people would find themselves in this situation if they have any possibility to get out of it, so several kidnapped people – former enslaved people – escaped to the side of the island today called Haiti and liberated this part of the island.

Kadoo means “pumpkin” in Persian. The national liberation dish in Ayiti is Pumpkin Soup. Pumpkin is also a very cute name for one of the cutest horses that ever set his four feet at our center.

I have chosen to call the video series of Ayiti and Kadoo – A story of Liberation – as liberation comes in many ways: Liberation from Oppression, Liberation from Disease, Liberation of Consumerism and Liberation to become your true authentic self and indulge yourself in the mission of serving the planet, people and horses.

Here are 10 highlights from 2017 and I once again would like to thank you all who choose to find your way to our amazing small center here at the end of the road on the unknown island in the eastern Caribbean.

The video you will see is the very first meeting between Elena and Magic in the same field as Ayiti and Kadoo and as their start up of forming a new family herd.

Elena and Magic used to live with the rest of the herd members, but as our beautiful lead mare Darling passed away two years ago, I have keept the herd in two groups of these two mares and then Jack and Spirit. After the passing of Darling, Jack would always chase Magic and Elena and they both would always provoke him in a way. I got worried they would hurt themselves. This might not been the result of their interactions, but because of my own fear that something might happen they have over the past year lived in these two groups.

It is very fascinating to follow the horses as they now make a new family after 10 years. Magic and Elena got to start as they both greeted Ayiti more respectfully and kindly than Jack (who is with Spirit). So we decided to team up Ayiti and Kadoo with Magic and Elena. We will team up Ayiti and Kadoo with Jack and Spirit when Kadoo is bigger so we are sure that he cannot get hurt in any confrontations. This might not happen at all, but I just like to avoid any possible situations.

In 2008, we lost the foal Honey born to Darling. Somehow Honey had gotten kicked in the jaw and over a week I watched the tiny beautiful foal lose all her strength and die as she could not eat and there was nothing we could do.
I cried rivers of tears and buried Honey. Afterwards, when I passed the grave with Darling she stopped and called out. I remember her calling as it was yesterday and still ponder how she could know where we buried Honey. There is of-course a simple possibility that she could feel, lots of emotions flowing through my soul as we passed the grave.

But there will always be something’s which is unexplainable.

Take your time to watch the video, it has so much beautiful language of boundary setting, curiosity, energy, foal talk and finally teaming up.

Ayiti keeps her borders clear and prefers to walk away while Magic and Elena are very curious and continue to follow them. Elena sometimes like to take charge, Magic is very curious, Elena keeps eyes on Magic and Kadoo makes his submissive moves and Ayiti keeps Kadoo with her and soon can communicate with ears, raised head and a small lift of her leg that Elena and Magic shall keep distance until she invites.

In the end of the video the horses returned to grazing and then once we moved the horses to the guava field, Elena actually got everyone running including Ayiti and it was the first time we saw her choose to canter.

It was touching as it was like Ayiti has so much inside her to be reawakened and liberated. As they run Ayiti got new light in her eyes and further steps of making a new family were taken.

Kadoo is now 4 months old and he will stay with the mares for some months more and it will be exciting to follow them.

Thank you all for following our journey and I wish you all the best for the new year.

Sahaja 2018 – Liberty Training Clinic will happen in December 2018 at our beautiful center: 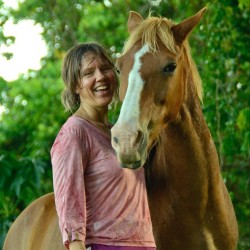